How To Live Above Evil.
5915
post-template-default,single,single-post,postid-5915,single-format-standard,bridge-core-3.0.2,qode-page-transition-enabled,ajax_fade,page_not_loaded,,qode_grid_1300,qode-child-theme-ver-1.0.0,qode-theme-ver-29.1,qode-theme-bridge,disabled_footer_bottom,qode_header_in_grid,wpb-js-composer js-comp-ver-6.9.0,vc_responsive

Home : Faith : How To Live Above Evil.

How To Live Above Evil. 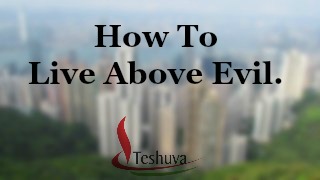 21 Apr How To Live Above Evil.

You are a raised personality! You should not crumble under the tests and trials of this world. You are made to outlast any challenge, and conquer it as well! You must understand who you are, whose you are, what you have and where you are from!
You are not of this world! You are a spirit being, made from a spirit tougher than the spirit in the world! You are designed to dominate, rule and subdue. You are a raised personality! You can conquer evil!

PLEASE TAKE THE TIME TO READ THIS BIT OF LENGTHY POST, COULD BE YOUR VICTORY!

But God, who is rich in mercy, for his great love wherewith he loved us, even when we were dead in sins quickened us together with Christ, (by grace ye are saved:) and hath raised us up together, and made us sit together in heavenly places in Christ Jesus: Ephesians 2:4-6

The mortal mind cannot fathom the restoration oﬀered to the body of Christ by the reason of the birth, death and resurrection  of  our  Lord  Jesus. Only eternity will be able to reveal the fullness of such blessing!

To belong to this kingdom is the greatest thing that ever happens to you. Click To Tweet

Now you know you have a new identity, you are not the same old fearful person you used to be because you are a new creature. And you also know that you have to identify or associate with your new identity.

Eyes Of Faith.
This is another reason why evil is not permitted to touch you: there is no evil in the heavenly places where you are seated. You  are  not  sitting  in the low places. Stop seeing yourself in low places. See with the eyes of faith.You are seated with Him.

I have a very remarkable testimony to the  praise  of  our God. When  a  poor woman in the city calls you poor, it may not matter much, but when a poor woman in the village calls you poor, you are truly poor. That was the situation I was in, they called me poor but I did not call myself poor, some said I was feeding from the crumbs of life, that I was living a low life. I knew I was a raised personality, I knew where I was going. Are you with m e ? WHATEVER THEY CAL YOU DOESN’T MATTER. Maybe they called you sickly, poor, barren or whatever, it does not matter. Just call yourself what God calls you in His word.

…Woe to the inhabiters of the earth and of the sea! for the devil is come down unto you, having great wrath, because he knoweth that he hath but a short time.

What Do You Believe?
If you believe you are of the earth you will get earthly things only,  it will be one struggle after the other, without any victories. Jesus never lost sight of His position in the heavenly place, even until the time came for Him to lay down His life.
Remember, Jesus Christ is a spirit, He was the Messiah and also He was ﬂesh and blood at the same time, here on this earth, but He never deemed Himself to be earthly. Stop seeing yourself as an earthly person.

For Paul and Silas, the people called them gods! Acts 14:12 Why? They were manifesting their sonship as spirit beings.

You are in the world but not of the world. And the only way not to see evil is to stop being earthly. Jesus said He is not of this world, He never saw Himself as an earthly person. He was in the world but not of  the  world. The  same  thing applies to you. You are not of this world. You are kept from evil as you begin to see yourself as a son Of God and walk in the heavenly places in Christ Jesus. See how far He has raised you!

Far above all principality, and power, and might and dominion, and every name that is named, not only in this world, but also in that which is to come: Ephesians 1:21

That is where you are seated, far above all  evil. Take  advantage  of  your  high position and operate from there . Whatever you declare while seated in the heavenly place in Christ has the backing of the ALMIGHTY GOD. Now see how it works. Once, while I was a way out of town my wife called me on the phone and told me the doctor’s report. As at this time she was about six months pregnant for our ﬁrst child Joshua. After series of tests, she was told that the baby will not survive and even if the child is able to make it, the baby will die after 72 hours (3 days) of severe jaundice. According to the doctors, this was due to the diﬀerence in our rhesus factor.

When I got that report from my wife, I asked her to hold on that I was on my way home. Click To Tweet

Immediately I got home and stepped my feet on our premises, it was as if the dew of heaven came upon me like rainfall, the clouds gave way, the windows opened and I heard very clearly “He that is from above is above all”. Immediately I heard that I quickly announced that Joshua (that was his name before he was conceived) is from above and he that is from above is above all. John 3:31
Whatever they call it, Rhesus Factor, Jaundice or whatever inﬁrmity, he is above all. This became my  song  day  and  night. And ﬁnally when he was born, he had spots all over him and my wife said to me “honey from what I read, these signs are symptoms of jaundice.” I said it can’t be. This happened more than twice, she was worried and came to me yet again to say the same thing, in holy anger I said to her, look at my eyes and she said “okay, okay” and Joshua has been okay since then.

Believe And You Will See.
I plead with you to get out of the ﬂesh. You have been raised to the heavenly places. Most believers want to see before they believe, this is a sign that you are still operating in the ﬂesh. When you do this you are aﬀecting yourself. To Martha this is what Jesus said,

Jesus saith unto her, Said I not unto thee, that, if thou wouldest believe, thou shouldest see the glory of God? John 11:40

This simply means if you want to see the glory of God, ﬁrst you MUST believe and then  you  will  see God’s  glory.  Believe that you are a raised personality that cannot be touched by evil! Please, believe that where you are seated, is far above evil.

It is my prayer that your understanding will be opened to grasp the surpassing greatness of His power that is available to you in the heavenly places in Christ Jesus.

The eyes of your understanding being enlightened; that ye may know what is the hope of his calling, and what the riches of the glory of his inheritance in the saints, And what is the exceeding greatness of his power to us–ward who believe, according to the working of his mighty  power, Which  he  wrought  in Christ, when he raised him from the dead, and set him at his own right hand in the heavenly places, Ephesians 1:18

Now look at where Jesus is seated at God’s right hand in heavenly places and we are seated together with Him. There is no sickness in heaven, there is neither stagnation nor poverty. Just because you do not have food to eat today doesn’t mean you are  poor.  No! You  are  not  poor. The scripture says He became poor so that you through His poverty might be rich, it is  also  written,  He  Himself  took  our i n ﬁ r m i t i e s ,  w i t h  h i s  s t r i p e s  w e  a r e healed. Look here, in the heavenly places  where  you  are  seated  there  is nothing like evil!

My Word To You!
Begin to operate from this realm and you will keep the enemy at bay, even if he comes close, you overcome him as you exercise your sonship rights from the heavenly places. You have power over sin, sickness, and all powers of the enemy!

Are you seated with Christ?
Are you exercising your authority?

Culled and edited with permission from the book :
I Shall See Evil No More by Benson Oritesjolomisan