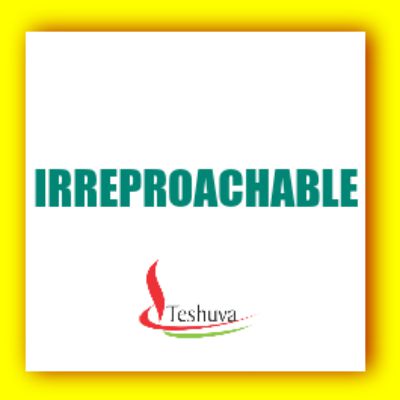 Is it possible to live without blame or fault? I wasn’t so sure myself. We live in a sin filled world, pull and tugs from here and there towards sin, towards evil. How can any one live to please God in this world? How can anyone conquer the enemy and his subtle or obvious enticements to sin?

I used to think that it was impossible for anyone living on planet earth to live a blameless life until I started reading the Bible. I read of Job…

There was a man in the land of Uz whose name was Job; and that man was blameless and upright, and one who [reverently] feared God and abstained from and shunned evil [because it was wrong]. Job 1:1 AMP

How can it be?
How could any man be called “blameless and upright” all at once?

Then I got even more stunned…

And the Lord said to Satan, Have you considered My servant Job, that there is none like him on the earth, a blameless and upright man, one who [reverently] fears God and abstains from and shuns evil [because it is wrong]? Job 1:8 AMP

Do you see why I got more stunned? God out of His own mouth, called the man Job, “blameless and upright”. Now, how did Job do that? Could it be that the evil in His days where less than the evil in our own days? Is it possible that the temptation to do evil was less compelling then than as it is now?

There are many people like you and I who live blameless before God and man both in the old and new testaments of the Bible, I’ll mention only two:

Now if these people could live their lives beyond reproach, we can too.

It is however very encouraging and liberating to know that we are not left to struggle by our strength to live this kind of life. We can live it because it has been accomplished for us by the crucifixion and death of Christ.

Yet now has [Christ, the Messiah] reconciled [you to God] in the body of His flesh through death, in order to present you holy and faultless and irreproachable in His [the Father’s] presence. Colossians 1:22 AMP

That’s Not The End.
God did not create robots without will or choice. He created man with a will to choose, even when He knows want we need, and the best for us. Even when He instructs, commands or prompts us, it is up to us to follow His nudge.

God has done His part be sending Jesus Christ to take our sins and die our death. Now we have to walk consciously in the wisdom which He has given to us in Christ. We have a part to play in living this life…

[And this He will do] provided that you continue to stay with and in the faith [in Christ], well-grounded and settled and steadfast, not shifting or moving away from the hope [which rests on and is inspired by] the glad tidings (the Gospel), which you heard and which has been preached [as being designed for and offered without restrictions] to every person under heaven, and of which [Gospel] I, Paul, became a minister. Colossians 1:23 AMP

Like I have written earlier, we have the help of God via His Spirit to be able to live this kind of life, a life without blame, an upright life, an irreproachable life. A life that is without fault before God and man. We are not helpless.

And I will pray the Father, and He will give you another Helper, that He may abide with you forever.
John 14:16 NKJV

Yes, we can live a faultless, blameless, upright, holy, and irreproachable life even in this grossly dark world. We can stand out and be the light God has called and empowered us to be! We can escape the enemy and his hell!

Are you living the life?
Have you received the promised help?